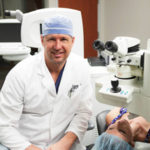 Dr. Siems is one of the most recognizable names in the field of refractive surgery. As his credentials will show, he has been a pioneer in refractive surgery serving as a principal investigator for 3 large FDA trials. He was selected as one of the first surgeons in the United States to investigate the surgical correction of presbyopia. He is a contributing co-author of a seminal book on the subject.

Dr. Siems was the first surgeon in Nevada to perform the bladeless lasik procedure.

Board certified and fellowship trained Dr. Siems, specializes in ADVANCED VISION CORRECTION procedures and often treats the more complicated cases other doctors are unable to treat.